Mr Smart from Surrey contacted the Leadbitter Glass Studio to enquire about a replacement leaded glass panel for his hall. The original panel was a rectangle leaded design and Mr Smart wanted to replace it with a design that would match his new front door glass.

This image on the left was sent to us to see if our Overlay Stained Glass product was versatile enough to create a panel that had a similar theme to Mr Smarts door glass.

We told the client that we could create a feature window that would match the door very well and we then created a computer generated ‘mock up’ of how the glass would look in exact scale so the layout could be approved.

We lined the design through with the existing rectangle lead panels and we used 12mm lead for these straight lines. The rest of the lead used was 4.5mm and 6mm lead that was aged afterwards to match the existing dark lead from the windows beside. We used a Fog Grey overlay which is an ‘off white’ colour and we used a frosted overlay for the other areas of the glass.

Below you can see the installed panel accompanied by the original hall glass windows. 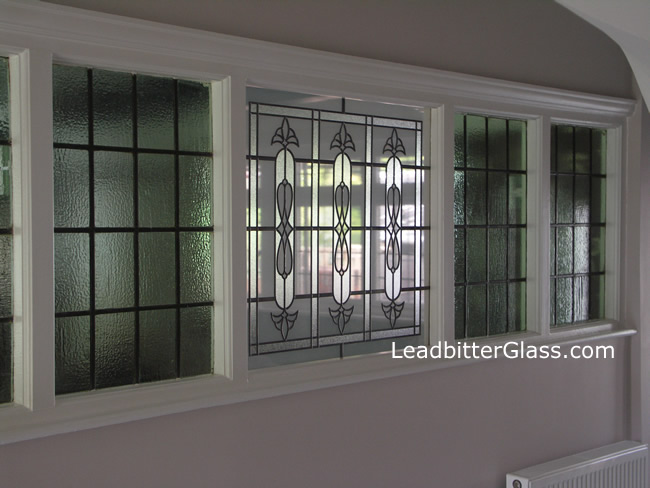 We also sell to trade….